If you've been following along on our Backcountry Discovery trip you will know that we needed to complete a re-do because of a breakdown on notorious Bethel Ridge last August. If you haven't been following along, I hope you will take a look back at Part 1 and Part 2 of our 3 blog journey through the breathtaking wilderness of the WABDR.

We were a little concerned about how cold it might be to go this early in the spring, but we boldly made hotel reservations that we could cancel, just in case it became a week of really bad weather. It turned out to be glorious! So off we went in our little bug to meet up with our friends in Ellensburg, WA.

If you know something about the WABDR and this sounds backwards to you, it's not because we're directionally challenged, it's because we have been doing the WABDR from Canada to Stevenson on purpose. We just happen to live in the Columbia River Gorge and we wanted to be home when we finished the backcountry roads instead of having to drive all the way home from Canada afterwards. We decided to run the roads backwards.

Our first stop was in Yakima WA for a bite to eat. We stopped at Bob's Burger's and Brew because it had good reviews, it was near the freeway and it had a nice parking lot where we could keep an eye on our rig while we ate. The Buggy was full of things and all open so we really wanted safe parking and visibility.

Bob's Burger's and Brew did not disappoint us. They have great 6 oz. burgers! We sat in the lounge where we had a good view of our vehicle and really enjoyed our meal. I like that they have several side options besides fries. I had a very nice green salad. Superman went for the fries. I'm picky about my fries but I have to say these were really good.

The next morning we were all finally on the Washington Backcountry Discovery Route! Time to stop and let out a lot of air from all those tires.

We had 3 large dogs with us on this trip and man did they have a great time!

The bridge in this group of photos is at a campground where we needed to bypass an electrical problem on the Dune buggy. We pretty much had to rewire it. Thanks so much to all the engineers in our group who helped. We were really glad Devon had continued on in the jeep after his injury. To see more on that adventure click to go to Part 2.

After a long ride along the ridge top we began our decent into Wenas. There are a few gates to pass through and a few really sandy spots. The second Gate feels a little bit like you are about to enter Jurassic Park. 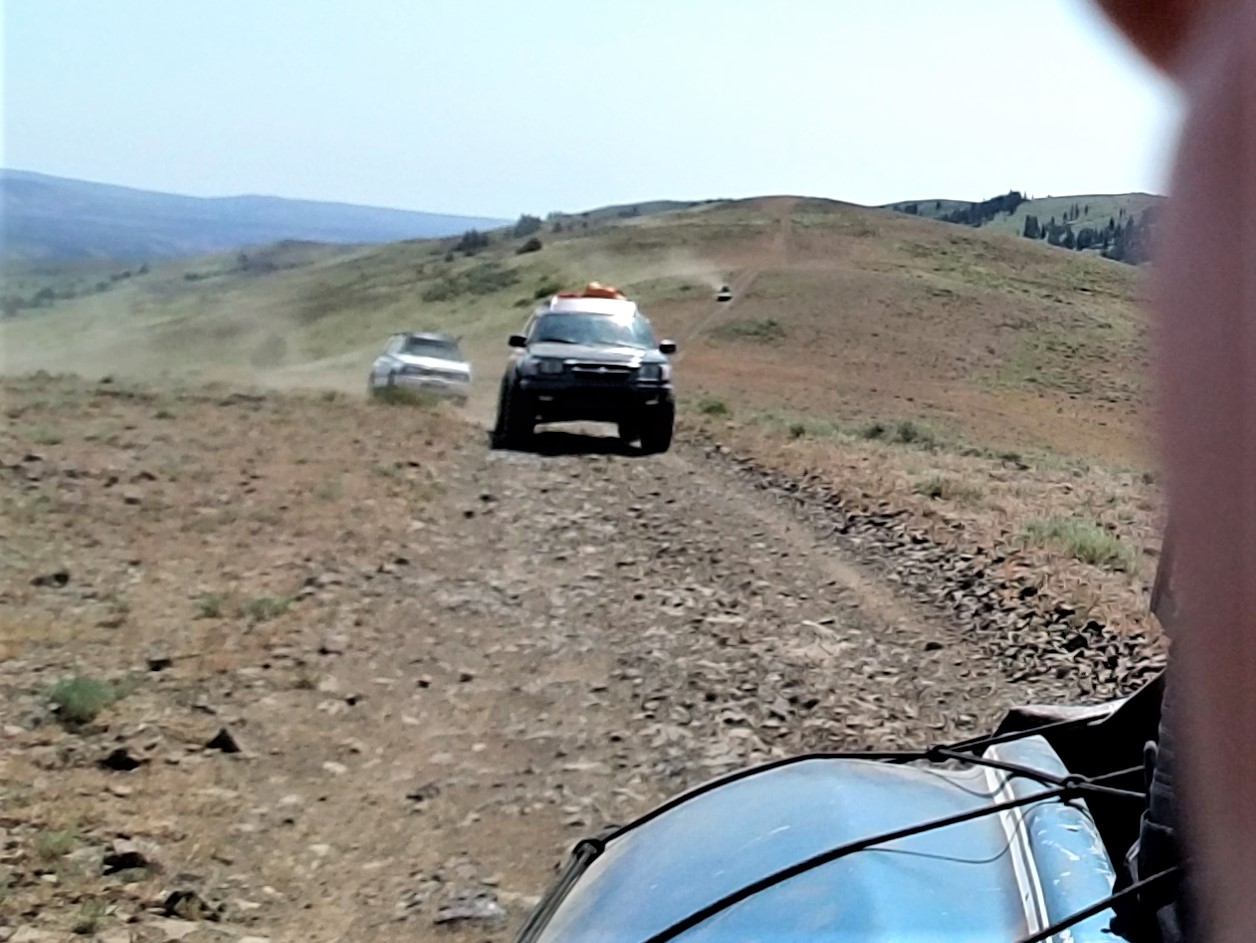 Tanner and Maya brought a collapsible table that was just what we needed to pool our resources onto and make a few fantastic impromptu feasts.

Tanner and Maya take a plunge!

The next ridge is a very long hard climb but the views are spectacular! No bad weather or road conditions so far.

After coming into the Nile Valley, we stopped at Elk Ridge Campground. They have a nice little store there and they are really friendly. This is a fantastic stop for a snack and a beverage. It's a very nice campground you might consider coming back to visit again. This time when we stopped in there was a large wedding party staying there. It's a very unique place with lot's of charm and it has a small stream running through it.

Leaving the Nile Valley we crossed a nice big bridge then abruptly begin the climb up Bethel Ridge Road. The road is going through a regrading process this year. It was very strange to see the old road completely inaccessible where we had driven only last August.

The GPS signal was certain we were off of the WABDR tracks but it was obvious we couldn't follow where the coordinates wanted us to go. On we went, up the hill on NEW roads, wide and well graded. Eventually the new road did connect with the original.

Along the top of Bethel Ridge is where we broke a ball joint last August and our poor little buggy had to spend the night in the woods all alone. That story can be found HERE.

This trip we hummed right on through! Below is a little bit of the muddy action. The snow is really gone but the water hasn't dried up yet.

In this video you can hear how much the Dune Buggy's frame is squeaking.

After we came off the mountain into Packwood, Superman bounced the buggy and Mr. Lux crawled around until he found where the bolt was missing that was making the frame create such a racket.

The next day Mike replaced it, then Maya found another loose bolt and it was tightened. Wow! It made such a difference. No more squeaking.

Mr. & Mrs. Lux with their dog Beemer at the cliff's edge.

Our Champion! Bethel Ridge has been conquered!

The elk are abundant in Packwood. They love to spend time mowing the lawn here in front of The Cowlitz River Lodge. We really enjoyed our stay here. Make reservations for your trip to Packwood well in advance because they book up. Most hotels are very nice. Do not stay at the Packwood Inn. Many of our group stayed there last August because they thought they would camp but then changed their minds and not having any reservations, they were forced to stay at the only hotel with available rooms. The Packwood Inn. Dirty, dirty, dirty, and lets not forget the horrible service.

The Cowlitz River Lodge has large very clean rooms, a large dining area with hot food for breakfast included and they offer a 2 glass per person complimentary wine tasting for each guest from 6-9 pm each evening. What a deal! Worth every penny by comparison.

We departed Packwood on the last leg of our journey around 8:30 AM. I think that was our departure time most mornings on the WABDR and it worked out fairly well all along the route.

Our friend Joe, who was with us on our first WABDR journey, brought his wife Sandra and they joined us at Packwood for our trip down to Stevenson. It was so great not to be the only girl on the trip this time. We actually had five women on this trip and we all had a blast!

As we came close to Lake Takhlakh we began to see just a bit of snow along the road. Then, almost immediately, it became a lot of snow. Very soft wet snow that wasn't too deep right at first but quickly became several inches if not feet deep around the next bend. At least 2 of our 3 vehicles probably couldn't make it as we were equipped so we would have to find a work around.

It was a beautiful spot to stop and take some pictures. Mark and Mike towed the Buggy back to solid footing and the dogs had a ball in the snow.

We backtracked to Horseshoe Lake Campground to take a look and plan our next steps.

We didn't want to go too far off the WABDR and we wanted to get to the other side of Lake Takhlakh on the same road where we had to turn back. Mark and Joe had been up the other side just a few days before and they were hopping the snow had melted enough for us to get through.

Mike and I had seen a sign for Randle, WA on NF #5603 just a short way back so we decided to take that road, NF 5603 North to NF 56 where we turned west then crossed the Cispus River just before turning west again onto NF 21 We continued on to NF 23 where we turned south taking us to the other side of Lake Takhlakh at NF 2329.

We had continued on NF 21 West until we turned South on NF 23 although we know now the snow was melted on NF 5601. That would have made our work around shorter but the guys had been there only a few days before and it had been impassable. It's incredible how much snow can melt in just a few days!

With that said, we've only been home a few days and there is probably more snow falling around 4500 feet today and possibly for the next few days.

Check on conditions before you go.

The weather and road conditions are highly changeable.

Since we had such a lengthy day adding our workaround to the trip, we decided to call it when we got to the turn off from NF 23 toward the ice caves and we headed for Trout Lake in the direction of home.

We live near enough to be able to make this a day trip another time and we definitely will. We are planning a loop with the Dune Buggy from Lyle, WA to cover the rest of the WABDR. Stay tuned for more adventures!